I’ve recently applied to the UWM National Writing Project’s summer institute, something I’ve been itching to be a part of for some time. So many of my mentors and colleagues speak highly of their own experiences with the NWP: the immersion in writing research,  the camaraderie of fellow writing teachers, the epiphanies uncovered regarding best writing practices – what teacher wouldn’t want to be a part of this?

So, after attending  this year’s UWM NWP conference, I returned to my classroom, eager and inspired to begin my application, part of which included the following prompt: Describe yourself as a writer. Please include your accomplishments, challenges and experiences. What do you do well and what would you like to improve?

…and then I didn’t write anything for like four days.

I can’t tell you exactly what stonewalled me about this prompt. It was just intimidating. It felt huge. It was a cold reminder that I often romanticize the writing life,  spending more time thinking and talking about writing rather than, ah, you know, writing.

Writing reservations haunt all writers. Sure, there are those transcendent moments, those bursts of inspiration where you write and write and write and are nigh unstoppable, the muse continually singing her sweet, melodic songs of inspiration… but a lot of writing – the part we sometimes talk less about with our students – is in the struggle. A lot of writing is the in the not writing. More often than not, the writing process is about writing just to discover what you’re trying to say. The dirty rotten lie that students have convinced themselves of is that they have to know what they’re going to write before they write it. It’s a lie that I too sometimes tell myself.

So I turned to my writing heroes, desperate for direction.  Anne Lamott, in her famous Bird by Bird: Some Instructions on Writing and Life, was, like many times before, the anodyne to my self-imposed writer’s block. In explaining the stepping stones of short assignments, Lammott writes:

It reminds me that all I have to do is to write down as much as I can see through a one-inch picture frame. This is all I have to bite off for the time being… E.L. Doctorow once said that “writing a novel is like driving a car at night. You can only see as far as your headlights, but you can make the whole trip that way.” You don’t have to see where you’re going, you don’t have to see your destination or everything you will pass along the way. You just have to see two or three feet ahead of you… Writing can be a pretty desperate endeavor, because it is about some of our deepest needs: our need to be visible, to be heard, our need to make sense of our lives, to wake up and grow and belong.

Encouraging, right? Puts things in perspective. So I returned to the prompt, determined to begin with a one-inch picture frame. 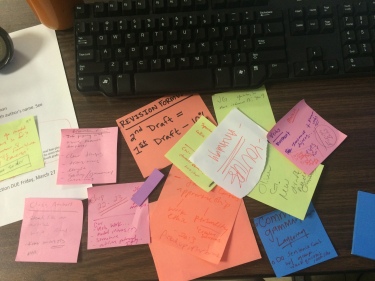 I began by examining my classroom desk, deciding that there must be an image, a one-inch picture, a way into the writing, that I could begin with. I zoomed in on the notes that cover my desk, thinking  what does this one-inch picture say about my writing habits? What does it say about me as a writer?

Here’s a small portion of where the one-inch picture took me:

I’m the kind of writer that lives with a mound of multicolored post-it notes atop my desk, each one covered in the scribbles and scrawls of ideas and reminders that I’m never patient enough to write down carefully so they’re legible to future-me.

I’m the kind of writer that knows all about the necessity of crummy first drafts but still grows overwhelmed by the intimidating vastness of blank white pages and cursed blinking cursors. Just wait for the muse, I think, secretly knowing how destructive that instruction is.

I’m the kind of writer that will clean before writing. Anything, really. My books. I’ll dust their dust jackets. My Shoes. I’ll pry tiny pieces of gravel and dirt from the diamonds that decorate their soles (I mean, who can possibly write with shoes infested with earth? Be reasonable). My basement. I once mopped my concrete basement floor instead of writing. I wish that were a joke.

I’m the kind of writer that, eventually, after admitting that I have to write something, overwrites, letting all ideas spill out, no filter, all clutter, a brain barf, something to sort through, something to clean up, punctuation and verbs akimbo, nouns and notes-to-self splattered on white like spilled wine on a wedding dress. It’s a mess, but it’s a mess I can sift through to discover whatever it is I’m trying to say.

I’m the kind of writer that is constantly revising. I whisper half-formed sentences in the grocery line, trying to match predicates to their subjects. I wrestle with clumsy lines on long commutes. I watch the cursor dance back and forth, over and over, eliminating and creating letters and words and phrases in a single paragraph before moving on. I gut moments in the writing I once loved. (This piece once contained an extended simile that began with comparing disparate writing ideas to a rotating cage of bingo balls. It ended with an uprising at a fictional senior citizens center. It was really weird. And not that funny. It was cut. You don’t have to read it now. You’re welcome. Trust me.)

I’m the kind of writer that, on my best writing days, can silence the critic in my own head, fall into the writing rhythm, and summon (not wait for) the muse with the clatter of computer keys and a mug of black coffee. On my best writing days, I live the advice of one of my writer friends: WRITE is a verb, an action word, a doing word. (Okay, so it was a Facebook status update rather than a one-on-one exchange of writerly wisdom, but still.)

The structure is pretty straightforward: Using the sentence stem “I’m the kind of writer that…,” I utilized intentional repetition to describe my writing habits, accomplishments, experiences, and challenges.

Writing this was therapeutic in unexpected ways. It guided me in forming a kind of writer’s identity, one that illuminated my own writing habits and struggles. Better yet, it got me writing.

It’s important for students to both identify as writers and confront their own habits and struggles and successes; it’s important for students to understand and develop their own writer’s identities. So I took this idea to my Creative Writing class a week later, curious to see what they’d do with it. I shared the origin of the idea, and away they went. Here’s a snapshot of their responses:

I’m the kind of writer that needs to be alone. In class I find it harder to write if I can hear the people around me, so I end up not writing anything. Once I get home, I can write a paper in 35 minutes if I have an idea, but no distractions. Just me, myself, and the paper.

I’m the kind of writer that will half-ass the sentences to write as quickly as possible to keep on progressing and see if I have any good ideas that might pop out. As lethargic as I am, I don’t wait for my ideas to pop out. If I have to write a crappy sentence for now, I will, and I will revisit that sentence later.

I’m the kind of writer that will buzz through typing words, sentences, paragraphs, sometimes entire pages, in a single instant, and then come to a screeching halt and fail to even plod along at one word per minute.

I’m the kind of writer that will let his mind wander when he idles on a project.

I’m the kind of writer that knows he would need to have scheduled time to write, because otherwise I would use my free time to do anything else. Probably sleeping.

I am the kind of writer that constantly over reads my stuff and tries to make corrections before the final piece is done, often changing the whole direction of the piece entirely.

I am the kind of writer that makes lots of side comments, almost like I’m having a conversation with myself on paper/computer screen.

I’m the kind of writer who has an easier time drawing what I’m thinking rather than writing it out.

I’m the kind of writer who, when getting into a crazy writing trance, writes. My hand takes over, and my mind wanders, until the end product is something I didn’t anticipate (or want) to take form and exist… and then play video games.

I’m the kind of writer that has a vast amount of ideas for the next piece that needs to be written, and not a single word down on the page.

I’m the kind of writer who focuses on the minutia of a single detail in my head, and losses it before my fingers are on the keys.

We spent 10 minutes writing using the stem. Then we circled the room, each writer sharing two or three examples of their own writing habits and rituals. As we listened, I encouraged students to add to their writing in list form to capture any ideas that another writer gave them regarding individual writer processes. The discussion itself was successful, and the writers in the room were able to speak openly about process. It was an opportunity – a first step – in developing an individual writer’s identity.

In retrospect, this is something I’ll do the first week of classes next year, as it hit several targets we aim for in our classrooms: We wrote. We reflected. We discussed. We listened. Then we wrote some more. It was easy, enlightening, and fun.